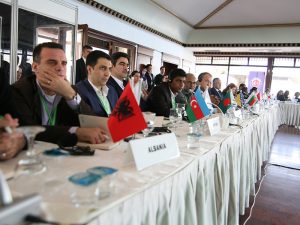 Carrying international activities to a top level, Yeşilay has taken an important step to become a global non-governmental organization. Having been organized so far around the world, Green Crescent signed the declaration on International Federation of Green Crescents with the participation of 30 countries on 8 April 2016 in İstanbul.

Green Crescent has carried its organizational structure to the level of federation with the aim of growth in international arena. Gathering in İstanbul under the leadership of Turkish Green Crescent, representatives of countries from around the world signed the declaration on International Federation of Green Crescents on April 8, 2016 in İstanbul.

The federation launch meeting was attended by representatives from Afghanistan, Albania, Azerbaijan, Bangladesh, Bosnia and Herzegovina, Bulgaria, China, Indonesia, Ivory Coasts, Palestine, Georgia, Montenegro, Kenya, Cyprus (TRNC), DR Congo, Lebanon, Malaysia, Mali, Niger, Nigeria, Pakistan, Senegal, Somalia, Sudan, Tanzania, Thailand, Uganda, and Yemen. Prof. M. İhsan Karaman was elected to be the president of the federation by the General Assembly in the federation launch meeting. Pointing out that they will develop active collaborations with different social segments, international organizations, institutions and organizations of the countries they belong, President of International Federation of Green Crescents, Prof. İhsan Karaman explains in his speech at the meeting that federation will play an important role in carrying out preventive, protective and rehabilitative works in member countries with the aim of fighting against addictions.

“Green Crescent’s Works Will Be a Model for Member Countries”
Touching upon the fact that there are various problems in each member countries, Prof.  Karaman said:

“Each year, smoking causes 6 million people’s death while alcohol-related diseases cause 3.3 million people’s death. On the other hand, drug-induced deaths reached almost 200 thousand annually. There are problems available about addictions in each member countries. We will conduct works based on prevention, advocacy, rehabilitation and coordination by using evidence-based methods in the struggle against addiction about the works to-be- applied in the countries belonging to the federation. Our federation will also play an important role on projects to-be-applied and on developing capacity for the struggle with addictions in member countries. On the other hand, the works applied by Turkish Green Crescent will be a model for member countries.”

Increasing substance abuse rates observed for reasons linked to the occupation in Palestine has become a serious social problem in Gaza and the West Bank in recent years. The other country with widespread use of addictive substances in the Middle East is Yemen. 75 percent of men and 45 percent of women in Yemen use the substance known as “qat/khat”. Drug trafficking focusing toward the Gulf States is also increasing the rate of drug use in the region with each passing day.

High rates of alcohol and drug use is noted in Bosnia and Herzegovina which is also  one of the countries under the roof of International Federation of Green Crescents as the results of post-war traumatic affects seen in the country. Another country, Lebanon, is in the first place among the Islamic countries in the use of alcohol. There is also a large scale of pipe smoking in the country.